Hello everyone! I know it has been a long time since I have posted, but people are still checking this blog and contacting me about what is going on with the CWC co-location request for for next school year, 2017/18.

February 1, 2017, LASUD gave CWC a preliminary offer of space at Grand View, Palms and Short Elementary Schools.
March 1, 2017 CWC responded to the preliminary proposal with a counter offer of space at Palms and Short ES. As for Grand View, CWC states "Due to the hostility from the Grand View community and the public opposition to CWC3’s location there, CWC3 does not wish to be located there."
On or before April 1, 2017, the district will issue a final offer. The final offer is non-negotiable and CWC will either have to accept the offer in full by May 1 or decline it all.

What will CWC do now that both Palm and Short are also expressing open "hostility" to a CWC co-location?

Posted by acbenitez at 12:26 PM No comments:

This morning Grand View Elementary School parents were informed that Citizens of the World Mar Vista has requested a co-location at Grand View for 2017/18.  The parents are furious and vow to fight this co-location.

Oh...just when I thought I was done with CWC Mar Vista, they follow us to a new school. As a Grand View parent, I am upset that any school would want to take space away from this excellent school. We needs those resources to provide the best education for our children.

As someone with experience of a CWC MV colocation, I can tell you that I am terrified of the thought of another co-location with this particular charter school.
In 2013/14, I documented on this blog CWC's disastrous co-location at Stoner Elementary.  Besides the resources lost to the co-location, the CWC community's entitled and elitist attitudes created many other problems for Stoner including: separate and unequal conditions, and safety issues in the childrens bathrooms, among other issues documented by this blog.
CWC ended the school year in an incident where a charter student was stripped naked outside on campus and hosed down.  Even more disturbing though, is that many of the CWC staff involved with the hosing are still employed by the charter school.

As GV parents are learning more about CWC previous co-location, their resolve to fight this co-location grows stronger.
Posted by acbenitez at 10:38 AM No comments: 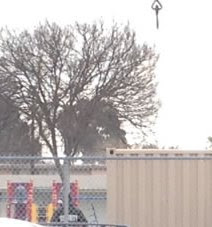 Today, the blog received reports that Stoner parents and local residents saw the ICEF security guard smoking and hiding behind the storage containers on the Lindblade Street side of campus.
One resident snapped the accompanying picture as the guard took his last puff.
Stoner ES parents are concerned that this ICEF staff was smoking on campus. They are also concerned about what he was smoking on campus.
Parents are furious and demanding answers from ICEF as to how they screen and hire their staff, and what kind of training protocol they provide.
This is just incredible. Who would think it was okay to smoke on an elementary school campus? Obviously, not this guy since he tried to hide behind the storage bins... this same hiding place on campus that 4 year olds use... amature hour continues.
Posted by acbenitez at 12:58 PM No comments:

Last week, I received an email from the LAUSD Charter School Division (CSD) informing me that CSD Petition Oversight Team would be investigating complaints against ICEF for the following:

Posted by acbenitez at 12:26 PM No comments:

Little did I realized that the incident about ICEF Vista smuggling items on to the Stoner Avenue Elementary School campus would result in a second complaint.
For quite a while now, ICEF Vista has been using a canopy shade all over campus.

What's the problem with that?

Well, last year, Stoner ES parents met with LAUSD officials to discuss shade options for the campus like trees, overhangs and canopies.  One of the things that parents were told was that due to safety reasons, canopies could not be used on campus. The structures were not secured and could easily blow over and hurt someone. It might sound ridiculous, but them's the rules and everyone on campus needs to abide by the rules for the safety of all.

Yet, for quite sometime ICEF has been following its own rules and has used the canopy not only in the ICEF lunch area, as pictured, but also in the play yard where the danger of this unsecured structure blowing over and hurting someone was even greater.

A col-located charter school should not be able to put people on campus in danger to have a special advantage over the regular school.
Even something as simple as shade is a resource that should be evenly distributed. The ICEF side of campus should not have special privileges to make their own rules.

Posted by acbenitez at 7:08 AM No comments:


For a few weeks now, Stoner Avenue Elementary School parents have been concern that ICEF Vista students are accepting items through and under the school fence on almost a daily basis.


Presumably, it is just ICEF parents bringing their children lunch, but if it is, then why are the parents not going to the main office to drop of the lunch, or signing in at the office so that they can go on campus and hand their child the lunch. Something about smuggling "lunch" under the fence on to my children's campus just doesn't feel right.

Considering that there was a recent incident where a gun was brought on to an ICEF campus, Stoner parents are greatly concerned that ICEF might not be following all safety protocols while co-locating at Stoner ES this year.

Even more concerning is that this smuggling is done in plain view of ICEF staff. Does ICEF really believe that this practice of handing items through the fence is acceptable?

Stoner ES parents are greatly concerned. They don't know if what is being smuggled on to campus is a gun, contraband or a baloney sandwich. Parents are demanding that this practice be stopped immediately.


Posted by acbenitez at 7:22 AM No comments:

This weekend, Del Rey held its annual Del Rey Day celebration at Glenn Alla Park.  The event was awesome!  There was good food, good friends and great music.
The Stoner Avenue Elementary school orchestra was one of the featured performers. The orchestra was great. It was exciting to see how the music program has evolved and grown since it began last year.
While chilling at the event, I was talking to a group of neighbors who are also ICEF Vista parents.  I don't know if it was for my benefit, but the parents began complaining about the ICEF administration. The parents complained about the inexperienced staff at the school and home office, the lack of responsiveness from the administration, and the continual requests for donations and volunteer hours.
Then one parent mentioned that they were most disturbed by the request for gifts for a baby shower for ICEF Vista Director Kristen Buczek. The others agreed and said they were very annoyed and peeved about this solicitation of gifts for the director.
I was stunned and asked what happened. The parents complained that earlier this year, ICEF had sent a school wide automated telephone message (i.e. robo-call) to all parents soliciting gifts for Director Buczek's baby shower which was being held on campus. They said the solicitation was similar to all the others solicitations for donations that they had received and so many parents contributed without realizing that they did not have to. Parents were told the sex of the baby, preferred colors and even given suggestions on gifts.
The parents said that they felt that if they did not donate to this or the many other ICEF Vista donation drives and pleas for volunteer work, their children might face bullying from other students for "not supporting the school." They claimed that some parents donate money or serve minimal volunteer hours just to avoid problems for their children.

Posted by acbenitez at 7:20 AM No comments: